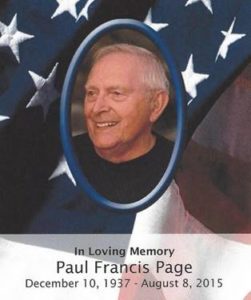 Paul and Susan Page were married 48 years after a 1-1/2 year courtship. He was not only a gentleman, but one of the most gentle men you could have known. Paul was diagnosed with mesothelioma in July of 2014 and passed August 8, 2015, much to the sorrow of his wife, 2 children, and 4 grandchildren.  Life can be the same after the loss of a trinket, but never after the loss of a treasure.