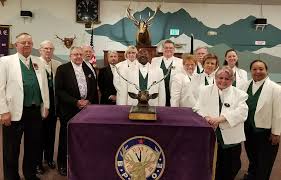 The Elks originally borrowed a number of rituals, traditions, and regalia from the Freemasons. However, by the first decade of the twentieth century, much of this had been abandoned as the Elks sought to establish their own identity.

Initiation and funeral rituals still exist, however. The initiation rite is not considered a secret. The initiation involves an altar, with a Bible upon it and chaplain leading the brethren in prayers and psalms. The candidate must accept a "solemn and binding obligation" to never "reveal any of the confidential matters of the Order". The candidate further promises to uphold the Constitution of the United States, protect fellow Elks and their families, only support worthy candidates for admission and never bring political or sectarian questions up into the Order. The funeral rite is called the "Lodge of Sorrow" and also involves prayers.

Lodge Officers often engage in initiation ritual competition at the district, state, and national levels. Bremerton Elks Lodge #1181 has a strong and proud history of participation and prestige.