The Hoop Shoot Program is a Youth Basketball Program that starts with a contest sponsored at a local Lodge. Winners move to the regional and then national level contest.

The Elks National Hoop Shoot is a free throw contest for youth ages 8 to 13. Through the Hoop Shoot program, the Elks been developing and reinforcing grit for nearly 50 years—long before researchers and experts concluded that grit is so important for our children. Just listen to the parents and contestants in these videos. They’re talking about grit. 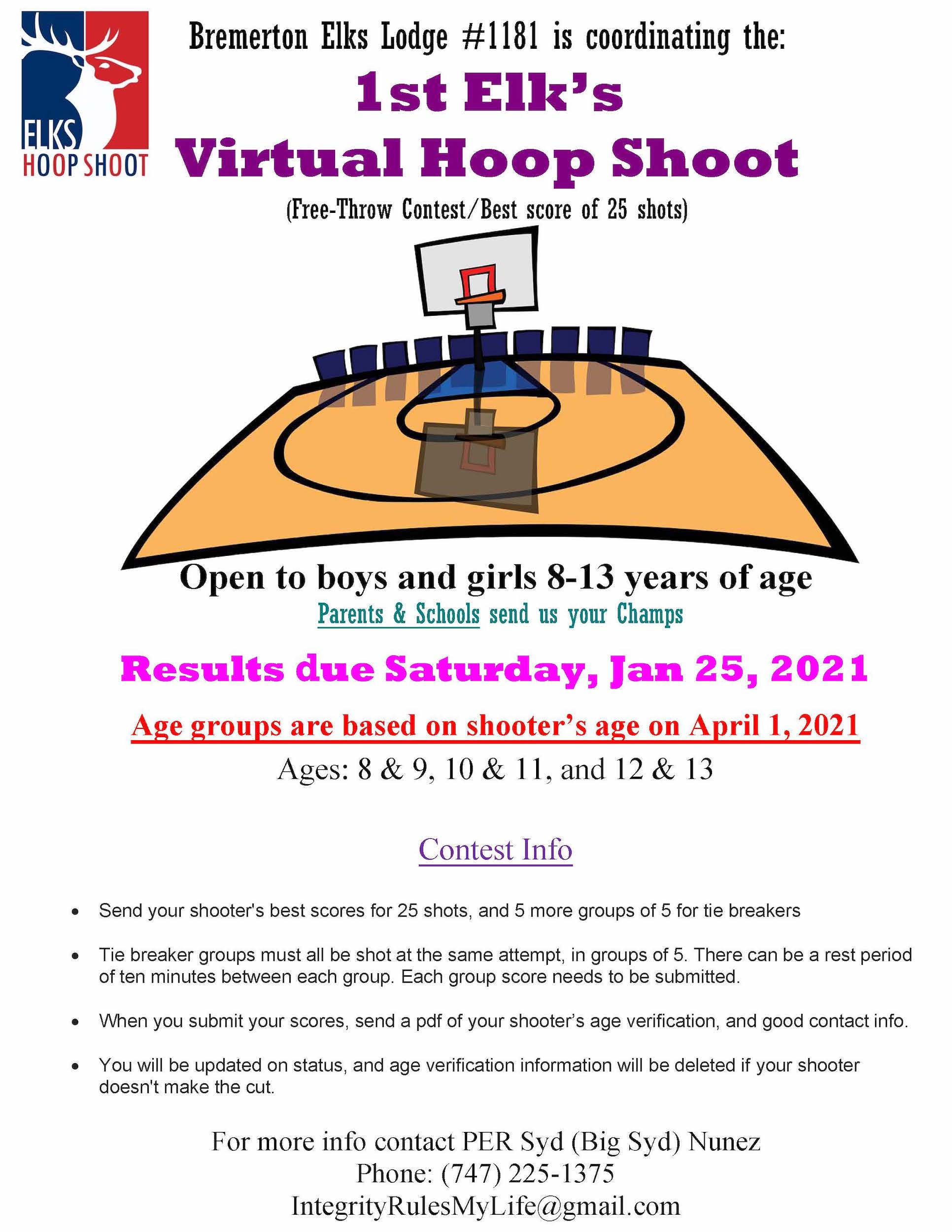 To learn more about the Elks Hoop Shoot program, click on the image to the left. It will open up a PDF flyer with some great information.

The 2021 season will be somewhat different this year, with only local and district contests. Please click on the caption below to see the Elks 2021 Hoop Shoot Game Plan.

Our Lodge Hoop Shoot coordinator is Syd Nunez, PER.

Virtual hoop shoot scores are due to our coordinator by 25 January, 2021.

See the flyer to the left for more information about this year's local Hoop Shoot Contest!

The Soccer Shoot Program is a Youth Soccer Program that starts with a contest sponsored at a local Lodge. Winners move to the regional and then to a national level contest.

Soccer is one of the fastest growing youth activities in the country. The Elks Soccer Shoot Program is geared to coincide with this sport phenomenon. From toddlers to teens, in our large urban centers to our small suburban settings, soccer is becoming the sport of choice for our youth. This program is the kind of sporting event to help keep our youth focused and away from undesirable activities.

The Elks Soccer Shoot program consists of two different contests that test different level skills at different ages. A "Five Goal Contest" consists of a series of five goals, decreasing in size from 48 inches to 17 inches. The age groups that use these goals are divided into two categories, U-8 contains all ages seven years old and younger, and U-10 group contains ages eight and nine. The contest is open to boys and girls who shoot separately. The U-8 contestants kick from 15 feet from the face of the goal, while the U-10 contestants kick from 18 feet from the goal.

The Grid Goal Contest consists of a full-size goal sectioned off so points can be scored when the ball is kicked into certain sections. The age groups that use this goal are U-12, which contain the ages ten and eleven, and U-14, which contain ages twelve and thirteen. The contest is open to both boys and girls and they shoot separately.

The Elks Soccer Shoot Program is a terrific program for our youth, the future of our country.

Our Bremerton Elks Lodge Soccer Shoot coordinator is Steve Lamb. He can be reached through our office (360) 479-1181.