The Lodge of Sorrow

The Elks conduct a special ceremony called a "Lodge of Sorrow" to honor their departed members and part of that ceremony included the Eleven O-Clock Toast.

The History of the Lodge of Sorrow

At every meeting of the BPOE, and every social function, when the hour of 11:00 p.m. tolls, the Lodge conducted a charming ceremonial known as the "Eleven O'clock Toast." In fact, the clock tolling the eleventh hour is part of the BPOE official emblem, and is directly behind the representation of an elk's head in the emblem of the Order.

Regular meetings of Subordinate Lodges have always been held at night. In the earlier days, they were usually held on Sunday nights and were concluded about eleven o'clock. As the participants departed, the members made inquiries about the absent members and expressed sympathetic interest in the causes of their absence.

It soon became a custom for some member to propose a toast to the Brothers who were not present. And in the course of time, this custom was quite generally observed whenever a group of Elks were together at eleven o'clock. Eventually, the Grand Lodge specifically provided for such a ceremonial to be observed during Lodge sessions; and designated it as "The Eleven O'clock Toast." Under this provision, whenever a Lodge was in session at that hour, the regular order of business was suspended for a few moments while the Exalted Ruler recited the beautiful ritual prescribed, concluded with the words: "To our absent Brothers"

Since women were permitted to join the Elks since 1995, the toast is now pronounced as "To our absent Members."

"You have heard the tolling of eleven strokes.
This is to remind us that with Elks
the hour of eleven has a tender significance.
Wherever an Elk may roam,
Whatever their lot in life may be,
when this hour falls upon the dial of night
the great heart of Elkdom swells and throbs.
It is the golden hour of recollection,
the homecoming of those who wander,
the mystic roll call of those who will come no more.
Living or dead, an Elk is never forgotten, never forsaken.
Morning and noon may pass them by,
the light of day sink heedlessly in the West,
but ere the shadows of midnight shall fall,
the chimes of memory will be pealing forth
the friendly message --
"TO OUR ABSENT MEMBERS" 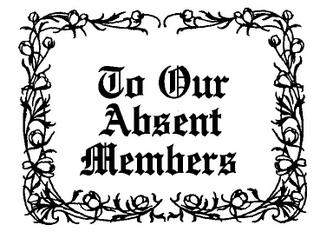